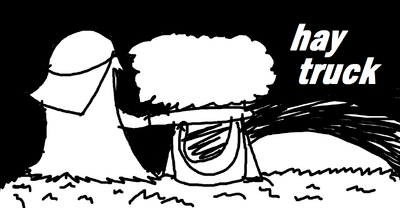 Haytruck is an American animated series created by EliNinja for The WB (now The CW). The series centers around 2 friends named Shurly and Nom who live their lives in a mysterious hover-truck of hay (with no known driver) as it rides across the country. The series aired on The WB in 2000 for a total of 16 episodes and used "On the Road Again" by Willie Nelson as it's theme song. The series was rated TV-PG-DSV in the United States for being one of the most violent and unusual American animated series since The Ren and Stimpy Show. It was also praised by many critics for it's sadistic and traumatizing ways of storytelling.

After it's cancellation, the series had aired a few reruns on The WB until around November 2001, when reruns had moved to [adult swim] until summer 2004. 6 years later, reruns had moved to the then-new cable channel, EliShows, and have stayed on that channel ever since.

Retrieved from "https://fiction-foundry.fandom.com/wiki/Haytruck?oldid=295162"
Community content is available under CC-BY-SA unless otherwise noted.